When asked to compare the state of broadcast journalism today with that of decades ago, television commentator Rachel Maddow remarked that there are no Walter Cronkites today, and she did not expect one to arise in the foreseeable future.

Cronkite established his reputation as "the most trusted man in America." He was a conventional hard news reporter and Maddow is an opinionated commentator. Yet despite these differences, one could legitimately argue that Maddow is filling Cronkite's shoes. When fact-based broadcast news is a rare commodity, Maddow's nightly program on MSNBC is one of the few that I trust. 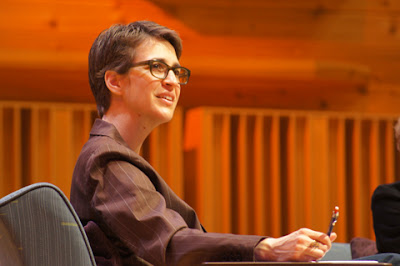 Under the sponsorship of Rutgers' Eagleton Institute of Politics, Maddow appeared this morning on the Cook Campus at an event hosted by Eagleton and moderated by its Director, Ruth Mandel.

Maddow started off with remarks about the production of the nightly show. The Oxford PhD clearly enjoys what she is doing, and said she considers her job more as one of explaining the complexity of the news rather than  simply reporting it. The most difficult part of her job, she explained, is deciding which stories to include for in-depth analysis. Programming decisions are made up to the last minute, and often guests are sent home while the show is on the air, having been pre-empted by other news. Maddow established her nerd credentials when she revealed that for relaxation she listens to CDs of lectures by Richard Feynman explaining the basis of his Nobel Prize in physics. She also said that she does not watch television news, preferring British comedy for her TV fare. She stressed the independence of the program's editorial decisions from the corporate sponsorship pointing out several stories that were critical of General Electric, up until recently the majority owner of MSNBC (and even today, GE owns 49% of that network.) While ratings are important in their ability to attract guests (she called ratings her "political capital"), there is a 100% wall of separation between the host and the show's sponsors.

During the question and answer session, Maddow was asked to discuss the most important under-reported story. Without hesitation, she replied Pakistan and the secret wars that are ongoing there. We have given their military billions of dollars, she pointed out, and that money has been used to create facilities for Pakistan's nuclear weapons program. Maddow asserted that Americans are saturated with war news, and that's why we don't see much reporting on Pakistan, although she hopes to be able to report from there some day. Another area that she feels is being given too little attention in the mainstream media is the resumption of permits for oil drilling in the Gulf of Mexico without any significant safety improvements - a topic that has been on some recent shows of hers.

She lamented the demise of the Republican party pointing out to the unholy alliance of social conservatives (whose agenda she categorized as "deep but not wide") and the business world that is driven by a financial agenda.

When asked what it was like to be a gay journalist on the national scene, Maddow said she didn't know - "I've never done my job as a straight person."

In response to a question from an Eagleton student, Maddow pointed out that the traditional liberal/conservative blocs are changing. For example, the pressure to cut defense spending is coming from different areas of the ideological spectrum. As the nature of war shifts from large and expensive weapons systems like the now-cancelled F-22 program to counterinsurgency efforts, the nation needs to and is taking a critical look at this area.

Maddow claims she has an opinion but not an agenda, and I believe this is an accurate description of her style. On her show, she spends a lot of time explaining complex issues, and she admits that sometimes she gets a bit too cute in using analogies and props, but that's what helps her with her message. Although at the end of today's presentation she was whisked off the stage to get back to New York to produce tonight's show, I feel I was in the presence of a person who will go down as one of the icons of broadcast news during the time that the whole paradigm of news delivery is changing right before our eyes. I only wish that she could have commented on President Obama's budget message which was delivered four hours after the Eagleton event. I guess I'll have to tune in at 9 o'clock tonight.

Posted by Deciminyan at 3:58 PM