About fifty years ago, I read John F Kennedy’s book Profiles in Courage - the stories of politicians who stepped out and bucked their party’s line to do what they felt was the right thing. Fifty years ago today, the first human being was rocketed into outer space. How are these related?

Certainly Yuri Gagarin, the 27 year old air force officer was courageous - to venture into the weightless void of space where no other human being had been. But that’s not the connection with JFK’s book that I’m referring to.

Over the past 50 years, the space program has inspired and challenged people all over the world with its accomplishments and ancillary benefits. It also has saddened us when astronauts and cosmonauts have given their lives in these mechanical contraptions. Complex technological accomplishments have become routine to the general public, including a somewhat blasé attitude toward the last several of the six manned moon landings, arguably the most important events of the twentieth century.

Now that the Shuttle program is coming to an end, the International Space Station construction is essentially complete, and NASA is ramping down its involvement by commercializing the booster industry, we are opting to cede leadership in manned space exploration to the Chinese and Russians.

The arc of the American manned space program parallels the arc of American politics over the past fifty years.

President Kennedy exhibited courage when he challenged himself and the country in 1961 to land a man on the moon and return safely before the end of the decade. It was an enormous challenge. We were behind the Russians in booster technology, a key component for a moon landing. We were mired in a Cold War and were about to get involved in a shooting war in Viet Nam. But things were different then. The nation valued science, and the nation prioritized the education of our citizens to prepare for the technological revolution that was facilitated by the emergence of the semiconductor industry. The space program was a wonderful stimulus program that paid off in advances in computers, medicine, aviation, information technology, and a host of other industries. And the wealthy paid their fair share in taxes.

Could a JFK moon landing challenge happen today? Doubtful. Every president over the last 50 years has given lip service to energy independence for example, but little substantive action has been taken. Politicians exhibit cowardice by providing tax breaks and subsidies for their wealthy benefactors while placing the burden of deficits upon those who can least afford it. We tinker around the edges of our fiscal problems, but very few politicians have the courage to do what’s right. Politicians are loathe to increase taxes on the wealthy - not to the high marginal levels we had 50 years ago - not even to the modestly higher levels we had under President Clinton. Instead, extremists like Congressman Paul Ryan have become the mainstream by cowardly proposing transferring Medicare to for-profit companies, severely reducing seniors’ accessibility to health care while enriching the corporatists.

America’s security is more than guns and fighter planes. Without a strong middle class, we become weaker both economically and militarily. Without the support for a superior educational system, the innovations that drive the economy will happen overseas. Without universal single-payer health care, our health care costs will continue to soar.

Our nation’s deficit is not just monetary, it is a deficit of courage. If we are fortunate, a leader like JFK will emerge and provide the challenge and inspiration to rebuild America from the Reagan/Bush disasters. If we’re not as lucky, the demise of America’s manned space program will be an omen of what’s ahead for the nation at large. 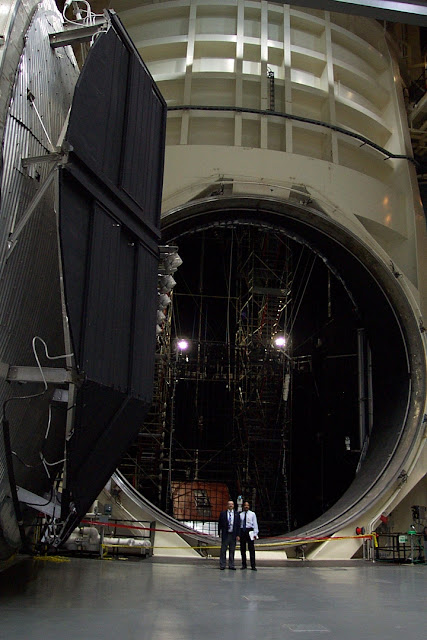 That's me and Dr. Segun Thomas standing in front of a giant environmental test chamber at the Johnson Space Center in Houston. Does America have the courage to make the science and technology investments in this type of endeavor today?
Posted by Deciminyan at 12:37 PM