Moorestown attorney Katie Hartman has become the third Democrat to officially announce their candidacy for the congressional seat currently being held by Tom MacArthur. Former Obama aide Andy Kim and perennial candidate Fred LaVergne have also thrown their hats into the ring. A few others have expressed interest but have not yet formally announced.
Recently, I sat down with Hartman in her law office to get to know her, talk a bit about her background, and her approach to a potential House seat.
Hartman and Kim excel in different areas, and voters will have to do their homework to determine which of the two (or more, if they announce) is: 1) More electable, and 2) would better serve the district. It is clear that either of the two would be better than Tom MacArthur who may have singlehandedly rescued TrumpCare from the heap of destruction.

Posted by Deciminyan at 8:47 PM No comments: 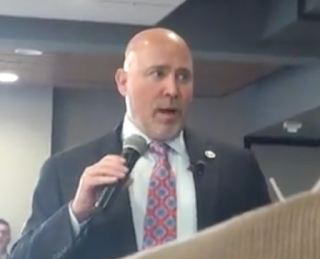 On May 10, 2017, Congressman Tom MacArthur held a town hall meeting at the JFK Center in Willingboro. With attendance restricted to 300 people inside, over 1000 people gathered outside to protest MacArthur's resurrection of Trump's evisceration of health care for all but the wealthiest Americans. Here's an index to my videos from the event.

Posted by Deciminyan at 8:39 AM No comments: