If you're a New Jersey family of four, do you have $4,000 lying around waiting to be squandered away? Well, you're too late. Chris Christie just gave that money to his big oil patrons and a judge agreed with him.
Today, Christie won his suit in court that allowed him to give $8 billion to Exxon by letting them go almost scot free for their pollution of dozens of sites in New Jersey. Instead, the taxpayer will be stuck with the cleanup bill over the next 20 or so years. That works out to about one thousand dollars per New Jersey resident. So Christie continues to bow down to the oil interests that he hopes will propel him to the White House while you and I are stuck with polluted ground water and contaminated soil.
Posted by Deciminyan at 4:32 PM 2 comments:

I don’t know if I should be puzzled or disappointed in the way Hillary Clinton is being treated. (For the record, I’m a Bernie Sanders supporter, but Hillary would be a better president than any of the GOP contenders.)

The coverage she gets focuses not on issues, but on trumped-up scandals (no pun intended.) Is that the fault of the media, or is the media just echoing public sentiment? The discussion around Hillary should focus on her moderate approach to social issues and her conservative approach to foreign policy and trade. But Benghazi and e-mail seem to be what the public is getting.

The same applies to Chris Christie. Yes, his culpability in Bridgegate says a lot about his character, but at the end of the day, that’s not where the important issues are. We should be talking about his dismal record on New Jersey’s economy, his tendency to put cronyism ahead of competence, and his disdain for the rights of the people of the state.

Talking about Clinton’s emails, Bernie’s hair, or Christie’s cronyism takes away from the serious discussion about issues that affect us all. Let’s focus, people.
Posted by Deciminyan at 10:45 AM 1 comment:

You can now download and listen to selected posts and other material from our new Deciminyan podcast. Just search for deciminyan on iTunes or Stitcher. Enjoy!
Posted by Deciminyan at 8:01 AM No comments:

Here it is. Your Moment of Zen

Bob Menendez is done. The once powerful chair of the Senate Foreign Relations Committee is now a back bencher, under indictment, and may or may not serve out the rest of his term which ends after the 2018 election. 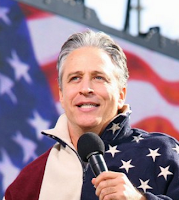 What are the desired characteristics of a successor? He or she should be to the left of center politically to match the sentiment of New Jersey's blue state voting bloc. Our next U.S. senator should be someone who is well-known and well-connected to donors who can provide the necessary funds to fuel an aggressive election campaign. Ideally, he or she should be disconnected from the political patronage machines that are pervasive in New Jersey politics.

One such person, who appears that he will have some time on his hands, is the recently-departed host of The Daily Show, Jon Stewart. While there's a lot we don't know about him beyond his television persona, his intellect, wit, and probing interview style demonstrate he has the capacity to join Al Franken as a comedian-turned-statesman in the U.S. Senate.

If Stewart decides on a political career as his next life experience, how should he run? As a Democrat? Or as an Independent?

Not being a part of the inner circle of Norcross/DiVincenzo political structure may be an advantage and a disadvantage. He's untainted by the ethically dubious undertakings that are endemic in the state, but we have seen how the bosses mistreat Democrats who don't toe the line (see: Barbara Buono 2013).

Running as an Independent has its plusses and minuses too. He would have to build a campaign structure from the ground up and his campaign would be more of a grass-roots Bernie Sanders style approach where social media and personal contact are key.

What do you think? Would Jon Stewart be interested in a political career? Should he run as a Democrat or as an Independent? One thing you can be sure of. With the interest he and his wife have on humane treatment for animals, the pig crate bill would become law instead of succumbing to a governor's veto.

Are you on Facebook? Join the Jon Stewart for US Senate community.

The Persistence of Christie's Legacy

As Chris Christie’s presidential ambitions (at least for 2016) begin to unravel, his legacy as governor is simultaneously being formed. Due to some of his more egregious actions, that legacy will weigh heavily in New Jersey for decades to come.

Numerous aspects of life in the Garden State will be reflected in his legacy – women whose health has been compromised, pipelines through pristine, environmentally fragile areas, and an educational system that has badly deteriorated.

This morning, the Senate Legislative Oversight Committee heard testimony about another Christie blunder that will have a significant deleterious impact on the economy and quality of life for New Jersey residents.

Stephen Gardner, Executive Vice President of Northeast Corridor Business Development at Amtrak, discussed the problems with New Jersey’s aging rail infrastructure with emphasis on the 105-year-old Trans-Hudson tunnels that bring trains into Manhattan. (Opeated by Amtrak, these tunnels are the sole entry into Manhattan for NJ Transit.)

Construction of additional tunnel capacity was underway when Christie assumed office. But in October 2010, he unilaterally and abruptly cancelled the project. His basis was unsubstantiated claims that massive overruns were about to occur, creating too big a burden to New Jersey taxpayers. Had he not taken this action and allowed ARC to continue, we would see some capacity relief around 2018. But that’s not going to happen.

The existing tunnels are running at capacity, leaving precious little time for standard maintenance of deteriorated tracks and electrical wiring. After Hurricane Sandy, the tunnels were flooded and there was no backup.  The system that carries 17% of New Jersey’s Manhattan commuters was shut down for four days at untold economic expense.

A new project, dubbed Gateway, is in the planning stages. It would build two new tunnels, allowing the existing ones to be closed for one year for much-needed rehabilitation. This could take as long as 15 years. Then, our trans-Hudson capacity would be doubled. Everyone agrees it needs to be done. But Congress (which funds 80% of the project) has yet to come up with any real money.

As Gardner explained, part of the problem is that Congress allocates capital funds on an annual basis, making a ten-year improvement program difficult to plan.  What Gardner failed to mention is that right after Christie’s ARC tunnel misstep, the Tea Party congress took over, making it an order of magnitude harder to get any required infrastructure project funded.
Posted by Deciminyan at 2:16 PM No comments:

Just Because its Legal Doesn't Mean its Ethical

Like many of us, I receive a slew of e-mails from politicians asking for my money. I guess they feel that they don’t receive quite enough from the corporation-persons that wine and dine them as well as fill their campaign coffers.

Most of these solicitations are annoying, but having just worked on a Congressional campaign, I know that they are part of the electoral game. But a solicitation I received this week from Congressman Tom MacArthur was particularly galling.

The letter opened as follows:

I'm leaving for Israel tomorrow. I think that it is important that I go there, meet with Prime Minister Netanyahu in person and get a firsthand understanding of just how bad this Iran deal is going to be.

This is wrong on so many levels:


AIPAC invited every freshman congress member to this junket. Fifty-seven freshmen, from both parties, are going. Only three are not.

Those who are opting to attend by accepting AIPAC’s invitation are in essence taking a bribe – a trip to a wonderful historic and spiritual place. Since Congress writes the rules, this bribe is perfectly legal. But like many things in Washington (and Trenton) that are legal, the ethics of accepting this trip from a strong lobbying organization are dubious. Especially, as in the case of MacArthur, you are going there with a closed mind and using it to raise money.
Posted by Deciminyan at 12:20 PM 1 comment: