Since the days of the Wild West, America has had a fascination with guns. Through a misinterpretation of the Second Amendment and the relentless lobbying of the National Rifle Association, restrictions on owning guns and carrying concealed weapons are few and far between. The NRA’s position is especially frightening because it promotes ownership of high-capacity automatic assault weapons whose only purpose is to kill and maim large numbers of people.

Now, as an article in today’s New York Times points out, even ex-felons are finding it easy to obtain guns and carry concealed weapons. In most cases, once a felon completes his prison sentence, restoration of gun rights is automatic or amazingly simple.

No doubt, ex-felons who want a gun are likely to get one, whether legally or illegally. But the article points out that in jurisdictions where former felons are denied gun rights, there is up to a 30% less chance that they will commit another violent crime. Yet, eleven states automatically restore felons’ gun rights without even a single review or hearing. Attempts to inject some sanity into this process are constantly thwarted by the NRA.

While ex-felons can obtain guns without much of a hassle, another right, one guaranteed by the Constitution, continues to elude them. In the United States, 5.3 million ex-felons who have served their time are barred from voting - a critical right that would bring them back into the mainstream of society. This, despite the fact that studies have shown that ex-felons who are able to vote are half as likely to commit another crime.

It’s crazy that the gun lobby holds so much power promoting weapons that kill people, while the voting rights lobbies struggle to provide basic rights to ex-felons.
Posted by Deciminyan at 4:18 PM 1 comment:

By now you’ve heard about the alleged crimes committed by the Penn State athletic staff and administration. These were both crimes of commission and of omission. Whether it was institutional culture or a deliberate cover-up conspiracy, the guilt lies not just with the perpetrators and their abettors, but with the institution itself.

Penn State is handling this situation badly – it’s as if Rick Perry were running its damage control operation. First, the school decided to continue with business (and I do mean business) as usual by playing today’s scheduled football game, which it lost to Nebraska. Even worse, it established an investigation committee to be led by Kenneth Frazier, a member of the Board of Trustees and a Penn State alumnus. This is hardly an atmosphere which suggests independence and impartiality.

What should have happened? Pennsylvania Governor Corbett and NCAA President Mark Emmert should have jointly taken the lead in the investigation, not the institution itself. They should appoint a truly independent committee with experts on criminal law, child molestation issues, intercollegiate athletics, and other relevant areas. Even if the Frazier Commission does an outstanding job, there will forever be a pall over its work because of the group’s connection to the university.

The university itself should show some contrition also. It should cancel the remainder of the football season and allow its so-called student-athletes to transfer their scholarships and continue their football careers at other schools.

But it’s not just the school and the state that should take action.

The NCAA, which is fond of sanctioning schools for lesser infractions, should bar Penn State from appearing in post-season play for five years, based on the seriousness of the institutional lapses. What was revealed this week is orders of magnitude worse than a wealthy alumnus buying a car for a prospective athlete.

The media should also examine itself. One news outlet reporting on today’s games referred to the crimes as a “tumult.” A tumult is when a drunken fan spills his beer on someone. What happened in State College was not a tumult, it was a tragedy.

The nation’s universities should also do some self-examination. Are these multi-million dollar athletic programs in consonance with the institutions’ goals? Intercollegiate athletics are supposed to teach life lessons and build character. Penn State is not the first, nor will it be the last, where these goals are subsumed by the almighty dollar.

The justice system should take care of determining guilt or innocence of the various perpetrators in this case. But if the institution continues on with business as usual, then it will not have adequately addressed the issue for Penn State and hundreds of other institutions across the nation.
Posted by Deciminyan at 4:52 PM 6 comments: 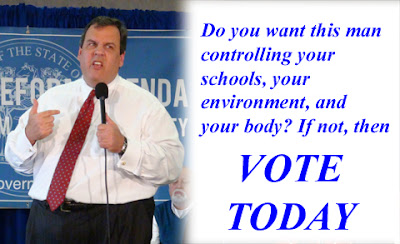 
Christie is Consistent in his Inconsistency


Victory in the Battle of Trenton


Is Scarlet Fever the Cure for Penn State’s Offense?


The Chutzpah Award goes to…

Keeping a Small Town Mayor Out of Jail

Among other things, Mayor Michael Gabbianelli allegedly provided a job as a police officer to his son, Michael Gabbianelli  Jr, despite an anti-nepotism ordinance. He also is alleged to have discriminated against an African-American roadside vendor pursuing a sales license in favor of other vendors who are white. To some people, the most egregious of all these charges is that hizzoner blatantly lights up and smokes on government property in violation of town ordinances.

Given these alleged transgressions, it is inevitable that Gabbianelli will face increased scrutiny, maybe even removal from office or prosecution. But there's an almost foolproof way the mayor can alleviate or even avoid the consequences of his actions.

All the mayor needs to do is change his political affiliation from Democratic to Republican.


While elected officials from both parties engage in inexplicable shenanigans, Republicans generally manage to avoid consequences while Democrats have to face the music.

First, consider the tragically long list of Democrats who paid the price for their bad judgement. President Bill Clinton was impeached for lying about a consensual sexual affair. Anthony Weiner was forced to resign from Congress for using his Twitter account to document his sexual proclivities. Democratic state senators Vincent Fumo (Pennsylvania) and Wayne Bryant (New Jersey) are serving prison terms for their crimes. They may soon be joined by former New Jersey Governor and Wall Street Executive, Democrat Jon Corzine. I doubt if any of Corzine's peer GOP CEOs will ever see a day inside a federal prison despite what their actions did to the economy.


Now, take a look at the other side of the ledger. Republican Senator David Vitter not only ignored calls for his resignation after it was revealed that he was a client of a prostitution ring, but he was re-elected to another term by the good citizens of Louisiana. His GOP colleague, Senator Larry Craig also rebuffed calls for his resignation after being caught soliciting sex in a public bathroom. And the most flagrant abuse of political office in our lifetime was that of George W Bush who, after his stolen election and dereliction of duty in ignoring warnings about 9/11, started an illegal war, sanctioned illegal torture, and ruined the American economy for a generation. Apparently Bush's actions don't qualify as "high crimes and misdemeanors", while Clinton's dalliances do.


So my advice to Mayor Gabbianelli is to go down to the Board of Elections and change your party affiliation immediately. You'll avoid the scrutiny that seems to be targeted to Democrats and you are more likely to avoid punishment for your alleged crimes. But don't be surprised if you become the subject of a Jon Stewart spot on The Daily Show.

Knight on the Knights

If you or one of your children are going to college, you know how much the cost of a college degree has increased over the decades. Students and their families are forced to go into significant debt even as the job market for college graduates shrinks. Students from lower income families are especially disadvantaged because loans are harder to come by. Unless the student is fortunate to have garnered a full scholarship, you are also paying a hidden tax – the cost of college athletics.

Proponents of big, flashy athletic programs say that intercollegiate athletics brings in lots of revenue. That’s true. But according to a report by the Knight Commission, only seven of the hundreds of institutions of higher learning pumped this revenue back into academic programs. The rest of them appropriated funds that could be used to reduce tuition to subsidize athletics.

The commission recommendations fall into the areas of financial transparency and prioritizing academics for both the institution and the student-athletes.  But the recommendations of the Knight Commission don’t go far enough.

College athletics provides valuable life lessons in hard work, team building, and coping with disappointment. But it has also become a P&L center (with emphasis on the “loss”) for institutions whose primary function should be academics and research.

These are tough times, and we don’t need incremental change – we need a “hail Mary” pass.

The state legislature should pass a law, and the governor should sign it, that requires athletic programs in state-supported universities to operate under a separate financial accounting system. Expenditures should not exceed revenue, just as these legislators advocate for government entities.

If our legislators are honest, they would adopt this proposal. After all, they require that educational institutions should be “run as a business”, and clearly intercollegiate athletics, with their massive television revenues, is a business. By separating the finances of athletics from academics and research, citizens, students, and parents would have visibility into the real cost of these programs and the drain of funds from the institution’s primary functions would stop.

For institutions like Rutgers, New Jersey’s State University, it would mean some cutbacks in the scope of their athletic programs. Maybe instead of having the football team travel to Louisville, Chapel Hill, and New Orleans, they should play teams from the New York and Philadelphia area schools. Instead of granting full scholarships based on athletic performance, they should consider academic potential.

The quality of play may go down. But the excitement and enthusiasm would remain. After all, these players are first and foremost students and like their non-athlete peers, they deserve the best education that money can buy. 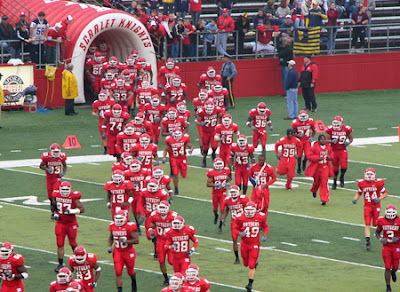 Posted by Deciminyan at 2:07 PM No comments:

All Others Pay Cash

The economy is in shambles. We are still fighting three unnecessary wars. The Wall Street crooks are still not being reigned in while demonstrators are being arrested and brutalized by police. So what does the Republican-controlled House of Representatives do? It re-affirms through a non-binding resolution that the official motto of the United States of America is “In God We Trust.”

But the bigger issue is the slogan itself. One of the fundamental principles of our republic is the wall of separation between Church and State. God belongs in churches, synagogues, temples, and mosques – not on government buildings or on our currency. The Supreme Court erroneously upheld the use of this slogan, contending that it has been so overused that it has lost its religious meaning. This is a shame – for both the church and the state.
Posted by Deciminyan at 9:23 AM No comments: