On March 22, the Senate Judiciary Committee considered the nomination of long-time Christie associate Phillip Kwon to be an associate justice on the New Jersey Supreme Court. Ultimately, the nomination was defeated with the Republicans voting in lock-step and in favor, while all but one Democrat voted in opposition. Kwon's defeat was based on some unexplained financial transactions pertaining to his wife's business, and the long-term tradition of political balance on the court. 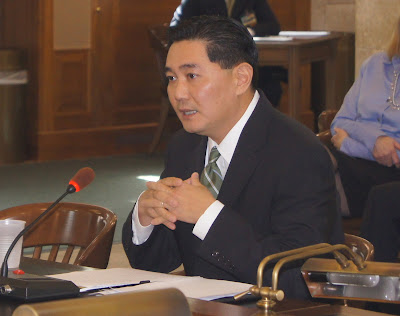 The links below connect to the video of public testimony (in chronological order) that was presented before the Committee. The Committee also heard about an hour of testimony in a private, confidential session.

Posted by Deciminyan at 8:44 AM No comments:

What are the qualities we should look for in our elected leaders? Certainly intelligence, compassion, the ability to deal with setbacks, and a sense of fairness top that list.


One of our legislators who scores high marks in all those categories is Senator Barbara Buono. I spoke with her yesterday on a number of issues including the power of the governor, the art of compromise, the level of civil discourse in the state, the reaction to unlimited funding of elections by corporations, the environment, ways to reinstate the millionaire's tax, and the prognosis for our urban areas, specifically Camden - the home of the South Jersey Democratic bosses. We also talked briefly about the possibility of the Senator moving down the hall in the State House to the Governor's office in 2013.

Barbara Buono is the antithesis of the persona that Chris Christie presents to the public.  She cares about the middle class and poor. She cares about the environment. She advocates for those groups that don't have expensive lobbyists on State Street. Even when she vehemently disagrees with her colleagues, she respects them as people and she respects their office, and doesn't use derogatory terms like "idiot" or "jerk."

Posted by Deciminyan at 8:33 AM No comments:

The Difference Between Democrats and Republicans

One of the signature accomplishments of the still-young session of the New Jersey legislative session has been the passage of a bill to ensure equal rights for married couples. State Senate President Stephen Sweeney and General Assembly Speaker Sheila Oliver assigned the bill number as S-1 and A-1, respectively, to emphasize the significance of this historic measure.

Yet, one of the main objections from the Republicans during the debate was that very fact. They whined that with the higher-than-average unemployment rate under the Christie administration, the legislature should not have been “wasting” its time on marriage equality, but instead should have put “jobs” (their shorthand for tax breaks for millionaires) at the top of the agenda.

Contrast this action in the Garden State’s Democratically-controlled legislature to that of a Republican-controlled legislature across the river in Pennsylvania. What do you think is receiving priority treatment there? It’s a GOP-sponsored voter-suppression bill that has the support of their Tea Party fellow traveler Governor Tom Corbett. Despite the fact that there is absolutely no evidence of wholesale voter fraud, the GOP is working to deny the vote to those classes of people who don’t have proper photo ID (and typically vote Democratic). This legislation is being fast-tracked to be in place in time to influence the 2012 presidential election. So I guess, by GOP logic, voter suppression is more important than creating jobs in Pennsylvania. The Pennsylvania GOP will pass legislation that will inevitably embroil the state in expensive lawsuits while the New Jersey Democrats will continue to work to ensure equal rights.

I often disagree with politicians from both parties, but this example shows the fundamental difference between Democrats and Republicans. Ensuring rights vs. suppressing rights.
Posted by Deciminyan at 9:16 AM 3 comments:

In a surprise move today, New Jersey Governor Chris Christie announced a merger between New Jersey and Delaware. The new state will be called "New Jersey."

"It makes a lot of sense", Christie said. "It has always bothered me that New Jersey had an odd number of counties, and by adding Delaware's three counties to the state, we now have a nice even 24, which coincidentally is the same as the name of my favorite television program."

In a related move, Christie announced that his alma mater, the University of Delaware, will be merged into Rowan University. Attorney Philip A. Norcross has been named President of the academic institution. When questioned about this action, Christie replied, "It just makes sense. This gives Rowan a Division I football team and nobody ever heard of a blue hen, anyway."

When told that Delaware Governor Jack Markell strenuously objected to the merger of the two states, and that the matter should be brought to the people, Christie replied, "He's an idiot. Someone should take a bat to him."
Posted by Deciminyan at 12:57 PM 3 comments:

The so-called Blunt Amendment went down in defeat. That’s a good thing, but we should temper our celebration.

The Blunt Amendment would have allowed employers to deny coverage to workers for any medical procedure that the employer unilaterally found morally objectionable. The bill was aimed against women (and their male partners); its objective was to deny birth control coverage.

Although the defeat of this draconian rule was welcome news, keep in mind that there were 48 votes in favor of the rule, in a Senate that consists mostly of white fundamentalist males.

Today’s vote is just one example why this is not the America I grew up in. In today’s America, a minority party whose philosophy is based on selfishness and greed has a stranglehold over the functioning of government. And the majority party, while not as mean-spirited as the minority, is not much better.

So celebrate the defeat of one misguided amendment. But don’t celebrate victory. We have a long way to go to resurrect the America that our Founding Fathers fought for and died for.
Posted by Deciminyan at 2:52 PM 2 comments: