One Nation, Under Educated

Observing elected officials ignore the Constitution is not a new phenomenon. In recent years, we’ve seen the prolonging of the unpatriotic Patriot Act and the illegal support of parochial schools with taxpayer money. Fifty-seven years ago, we saw Congress blatantly ignore the First Amendment by inserting the words “under God” in the Pledge of Allegiance that is recited mechanically and without much understanding by little school kids every day.

The First Amendment reads, in part, “Congress shall make no law respecting an establishment of religion, or prohibiting the free exercise thereof...” Yet, since the early days of our democracy, this fundamental tenet has been violated by religious zealots and politicians trying to score cheap points while disenfranchising non-Christians, agnostics, atheists, and others.

“One Nation, Under Educated” was the unofficial theme of the Second Church/State Issues Symposium of the Delaware Valley Chapter of Americans United for Separation of Church and State, held this weekend - fittingly at the National Constitution Center in Philadelphia.

The DVAU has branches in Philadelphia, Bucks County, and South Jersey. It brought together a series of speakers consisting of advocates, lawyers, historians, religious leaders and academicians. Being at this symposium surrounded by separation advocates was a breath of fresh air in contrast to the recent putrid outcomes in Washington where the Democrats are capitulating to the Republicans’ pro-corporate, anti-health, pro-pollution, anti-woman, anti-union, anti-jobs agenda.

As one speaker, Reverend Nate Walker, pointed out, although the United States is one of the most religiously diverse nations in the world, our politicians still don’t understand the First Amendment. He cited Alabama Governor Robert Bentley who, in his inaugural address, commented that non-Christians were not his brothers and sisters. This type of comment coming from an average citizen is protected speech, but coming from a state’s chief executive at an official function, it is inappropriate at best. Bentley later apologized, saying that he was sorry if he offended anyone, but never retracted his hurtful statement.

Greg Lipper, an AU attorney, walked through the history of the machinations that religious zealots use to introduce their agendas into the public schools. The Scopes Trial, which was the seminal event that eventually ruled against the creationists, only caused the anti-science groups to find more obtuse ways to promote their religious views on the taxpayer’s dime. Creationism morphed into “creation science”, and when the courts struck that down, the extremists then invented “intelligent design” to “compete” with Darwin. Just like the scientific evidence that children of gay couples are as well if not more adjusted than children of straight couples, when scientific evidence is unraveled (as in the case of evolution), right-wingers have to take more extreme positions to justify their philosophy. Lipper pointed out that effective use of science in similar cases is a good tool to counter the religious zealots.

In New Jersey’s Point Pleasant Beach municipality, for decades the council meetings have opened with the Lord’s Prayer until a lawsuit enjoined the council from promoting this religious rite at a public meeting. Frank Corrado, the ACLU attorney who litigated this case, described his experience and how after the saying of the prayer was struck down and replaced with a moment of silence, a group from a local church stood up and recited the prayer from the gallery. It’s difficult and generally unpopular to advocate against prayer, but as one bumper sticker philosopher has pointed out, “Separation of church and state is good for both.” The Point Pleasant litigation is still ongoing.

Other speakers talked about church and state issues from a historic perspective - from John Locke to the Baptists’ approach to slavery during the Civil War. The highlight of the day was the keynote address by Rev. Barry Lynn, the Executive Director of Americans United. His remarks touched on how John Boehner is doing an extreme makeover of the Constitution and how the defunding of Planned Parenthood is tantamount to punishment without trial (i.e blasphemy). Lynn mentioned President Obama’s insensitivity to church/state separation - how the President is perpetuating George W. Bush’s discriminatory hiring practices in federally-funded “faith-based” initiatives.

Overall, the discussions ranged from emotional to legalistic to academic. I only wish the group had recorded these presentations for more people to see. Separation of church and state is one of the fundamental principles of our democracy that is being eroded by the religious right and political extremists. In today’s climate, church/state separation may not be as newsworthy as Wall Street’s destruction of our economy or the appearance of Snooki at a college event. But just like the fact that our ill-advised wars are relegated to the back pages of the newspapers, defense of the First Amendment is not well understood by the general public, nor is serious discussion about that issue on peoples’ radar screens. Yet the erosion of the First Amendment has the potential to be as deleterious to our democracy as the tyranny of war or the demise of the middle class. 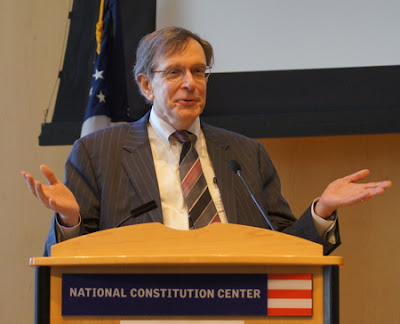 Rev. Barry Lynn
Disclosure: I am a proud card-carrying member of DVAU. Notification of upcoming events can be found on their web site: dvau.org
Posted by Deciminyan at 8:33 AM