Last night, I attended a rally meeting at a large synagogue in Voorhees where John Adler spoke and answered questions about Israel and the situation in the Middle East.  The meeting appears to have been sponsored by AIPAC and there were about 100 people in attendance.  While American Jews have as much diversity of viewpoint on Israel’s policies as do the Israelis themselves, this audience was clearly aligned with the right wing, as is the current government in Jerusalem.
Adler gave a short talk followed by questions and answers, although many of the “questions” were more like speeches from the audience.  Adler’s talk started off with a discussion on two meetings he had with President Obama (including one on Air Force One) on our policy toward Israel.  The congressman asserted that he and several of his colleagues impressed upon the president that some of Obama’s early rhetoric was encouraging Israel’s enemies, and that while the United States was putting pressure on the Jewish State to change its policies, no similar pressure was being imposed on other players in the region.  While Adler feels that some progress has been made in moving the president toward a stance that is both pro-Israel and in the best interests of the United States, he called these advancements “baby steps”.  He cited the president’s tempered response to the recent flotilla incident as evidence that the message is getting across.
In response to a question from the audience, Adler agreed with those present that the mainstream press often portrays Israel’s actions in a negative light.  He said that the United States should take some sort of action with regard to some of our allies’ actions to withdraw their ambassadors from Israel, but felt this should be done privately and diplomatically.
Clearly, the audience’s biggest concern was the Iranian nuclear capability.  Adler understands the technical and political difficulties in a military solution, and would like to see more pressure put on Iran through sanctions, diplomatic means, and covert actions.
Adler is staunchly pro-Israel, and he indicated that most other members of Congress are also.  I came away with the impression that Adler’s approach is not a “knee-jerk” one, but that he clearly understands the subtleties and potential traps in approaching the necessary support of Israel with blinders on.  No doubt, Jon Runyan will espouse a similar pro-Israel position.  But the question is whether or not Runyan understands the nuances enough to effectively promote the interests of the United States and of Israel.  Perhaps one day, Runyan will face tough questions at a news conference.  I’m not holding my breath. 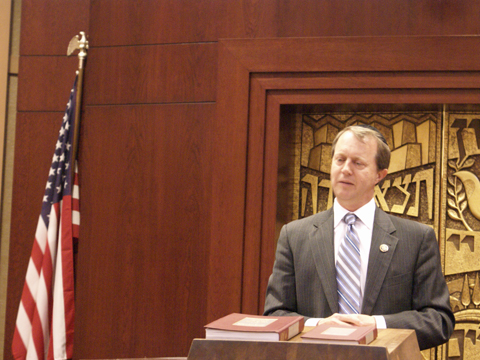 Posted by Deciminyan at 8:51 AM