The Impeachment of President Barack Obama


The Tea Party and their Republican acolytes have made no secret of their visceral hatred of our President, just like they demonstrated a similar antipathy toward Bill and Hillary Clinton in the 1990s.  Back then, the GOP dragged the country through a witch hunt against President Clinton and spent tens of millions of taxpayer dollars impeaching him, despite the fact that they knew  the Senate would not convict on their trumped-up and frivolous charges that fell orders of magnitude short of the constitutionally prescribed “high crimes and misdemeanors.”  Now, if the Republicans take control of the House of Representatives in the mid-term election (a highly possible scenario), history is about to repeat itself.
Facts and the welfare of the country are of no concern to the Republicans.  Neither is patriotism.  Their primary motivation is political power to enable them to serve the interests of their corporate sponsors and wealthy donors at the expense of the middle and poorer classes, labor unions, and minorities.
Additionally, the Republicans have shown that when they do lose elections, they have no respect for the electorate.  Besides the superficial charges that they used in the Clinton impeachment, their GOP-appointed Supreme Court disallowed the accurate counting of the Florida vote in 2000, essentially appointing George W Bush president without ascertaining the real will of the voters.  In California, they successfully recalled Governor Gray Davis, whose troubles can be traced directly to the shenanigans of Bush pal Ken Lay and Enron.  Even today, the Republican Tea Party is unconstitutionally trying to recall New Jersey’s Senator Robert Menendez – not because he committed any crime, but because they don’t like his voting record.  It should be noted that this disrespect for the electoral process is not reciprocal – the Democrats had compelling evidence of actual high crimes and misdemeanors of the Bush/Cheney administration, but no serious impeachment initiative was ever considered, nor are there likely to be indictments for some of the more egregious actions like the outing of a covert CIA agent.
The Republicans’ misuse of the filibuster and their stonewalling on even the noncontroversial presidential appointments further demonstrate the GOP’s disdain for government in general and Mr. Obama in particular. 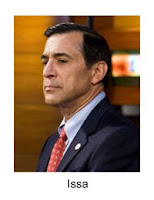 No doubt, one of the reasons the Republicans are desperately trying to regain their majority in the House of Representatives is the fact that that is the chamber where impeachment proceedings must originate.  The focus of the impeachment initiative is likely to be California representative Darrell Issa, who was the force behind the recall of Governor Davis.  Issa is an ambitious, telegenic Republican who craves power and would love nothing more than to become the center of attention in an Obama witch hunt.   As in 1998, while there might be enough votes in a Republican-controlled House for impeachment, it is highly unlikely that there would be enough votes in the Senate for conviction.  The Republicans’ goal would not necessarily be removing Obama from his post – after all, if that happened, Joe Biden would be president, and a president with the cojones to fight for Democratic principles is not what the GOP would necessarily want.  On the other hand, that scenario would put a Republican House Speaker John “Hell No We Can’t” Boehner next in line for the presidency – a horrifying scary thought.
Nevertheless, if the Republicans regain the majority, Issa and his cabal of corporatists would use their newly-acquired subpoena power to harass and intimidate the president and his staff, thus diverting their attention and deflecting the progress and change people voted for in 2008.  It’s sad enough that the Republicans are abusing their minority power in the Senate – if they regain control of the House, things will be a lot worse.
Despite their hollow claims of fiscal frugality, the Republicans’ investigation of the Clinton administration cost the taxpayers over $80 million.  If the “party of no” regains a majority in the House, the 21st century repeat of their misguided pranks is bound to run into the hundreds of millions.
It will be difficult to stem the tide of Republican gains in the mid-term elections.  Historically, the party in the White House loses a significant number of seats.  What’s different this time is the takeover of the Republic party by the lunatic fringe of the Tea Partiers.  Despite his failings, we need to allow the President to move forward with his agenda and become well-positioned for a second term.  For the sake of our children and grandchildren, it is imperative that Democrats and moderate Republicans work to be sure the GOP tea partiers don’t hijack our country and the values we all cherish.
Posted by Deciminyan at 5:15 PM