The Legislature Must Put the Brakes on Christie's Draconian Agenda

It is clear that our new governor is not listening to his constituents, but rather to his cronies.  So it is up to the legislature to provide the proper checks and balances.  Below is a letter I sent to my state senator and assemblypersons.   For others in New Jersey, I urge you to write to your legislators to press for an agenda that is sensible and compassionate as well as fiscally responsible.


When Chris Christie was elected governor of New Jersey, I was disappointed but still had high hopes that he would approach the job with toughness, fairness, and compassion.  Instead, in his first months in office, he has taken very simplistic and ineffective approaches to the complex problems facing New Jersey.
Now, it’s up to you in the Legislature to impose the proper checks and balances to provide those tough, fair, and compassionate solutions.  The Governor’s approach is not only bad for the poor and middle classes, but will be devastating for New Jersey’s businesses.
Much of the rhetoric on the budget from both the pro- and anti-Christie factions has been one-sided.  That is, people either complain about cutbacks in government services or they talk about the taxes our citizens pay to support those services.  Those who lament the loss of services rarely address the revenue side of the equation, and those who rail against taxes rarely talk about what services they are willing to cut.  I will address both sides of this equation:
The most important state services (in no particular order) are education, infrastructure, and health care.


On education, the Governor has taken a simplistic approach:  Freeze teachers’ salaries and impose across-the-board cuts.  His treatment of the teacher’s union has been childish and antagonistic.    There’s room for improvement in the current system, including elimination of the archaic tenure system and implementation of pay-for-performance.  Nevertheless, the Governor’s attitude toward teachers and public education has been counterproductive and has built barriers instead of bridges.  The future prosperity of the state is highly dependent on a robust and well-funded public education system.  Charter schools are harmful because they add bureaucracy and make it more difficult to enforce high educational standards.  Funding for public education, including highly-qualified, incentivized teachers, should be a high priority.
New Jersey’s infrastructure needs to support a state that ranges from densely populated urban areas to our wonderful agricultural areas that give us home-grown produce.  Our transportation systems are an integral part of keeping business in the state, and affordable mass transit is vital to enable workers to get to their jobs.  We need to ensure that our highways and bridges are well-maintained today so we don’t impose an increased cost burden on our children tomorrow.  We especially need to take advantage of those projects where there are federal matching funds – after all, those are our tax dollars too, and I’d rather see them support projects in New Jersey than elsewhere.  Yet, the Governor is foolishly turning down these funds.
For the well-being of our citizens, as well as to reduce costs, New Jersey should set the standard for health care.  The Governor’s web site is vague on his position on this issue – lots of platitudes with no specifics.  New Jersey should emulate and improve the Massachusetts universal health care initiative in order to attract businesses to the state and enable our citizens to be productive without worrying about choosing between medication and food.
Naturally, the things we need to make the state vital and productive do not come for free.  Whether you call them “taxes” or “user fees”, the sad truth is that the Governor is not paying as much attention to the revenue side as he is to the spending side.  In fact, as the chart shows, his proposals regressively place more burdens on those who can least afford it. 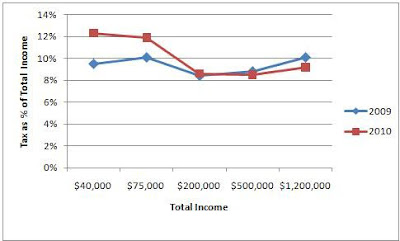 We need to reverse this trend, and ensure that our revenue stream comes from progressive sources.
First, we need to ensure that the wealthy pay their fair share of the tax burden.  Reducing the taxes for those earning over $400,000 is not only foolish, but is cruel to the majority of New Jerseyans.
New Jersey has one of the lowest gasoline taxes in the nation.  We should increase the gasoline tax by at least ten cents per gallon.  This has the side benefit of encouraging conservation, reducing the wear and tear on our infrastructure, and obtaining revenue from out-of-state drivers as they travel the highways of the state.  Assuming a person drives 12,000 miles per year and gets 25 miles to a gallon, this is a modest $48.00 tax increase. To make this non-regressive, licensed drivers with income less than $30,000 should receive an equivalent tax credit on their income tax.
The boldest steps are the most difficult, but typically have the biggest payoffs.   That is why we should make municipal and educational consolidation a high priority.  There is no logical reason for us to have 600+ school districts when one per county is sufficient.   Similarly, consolidation of municipalities, police forces, and shared services will go a long way to improving the state’s revenue stream.  Once considered the “third rail” of New Jersey politics, consolidation is now supported by 54% of New Jerseyans, according to a Rutgers-Eagleton poll.  Let’s take a page from business’ playbook and aggressively implement Lean and Six Sigma processes across the board to get the most from our taxpayer buck.
The governor’s approach to balancing the state budget is draconian and simplistic.  So it’s up to you in the legislature to do the hard work that will resolve our fiscal problems while at the same time improving the quality of life for our citizens, both now and in the future.  If we are successful, New Jersey will remain a wonderful place to live and work.   If we fail, we will see an exodus of businesses and long-term problems for our people.
Many of these ideas are enumerated in further detail on my blog at http://www.deciminyan.org, and I invite you to visit there periodically.
Thank you.
Posted by Deciminyan at 9:07 PM