Is the NRA a Terrorist Organization?

In exploring the answer to this question, one must separate the NRA leadership from its members. I suspect that many NRA members are sane, law-abiding citizens who register their guns and do not fire them in fits of anger. But an organization reflects the position of its leadership, so when I refer to the NRA, I’m talking about its leaders and sponsors  –  the gun manufacturers.

One definition of terrorism is “the use of violence and threats to intimidate or coerce, especially for political purposes.”

By this definition, the NRA is not a terrorist organization. The organization itself does not use violence to achieve their goals. Rather, they leverage the killings that their policies abet to lobby for unrestricted access and unbridled proliferation of guns. And I suspect that not all of the hundreds of killers that we read about all too often are members of the NRA.

The goal of terrorists is to instill fear in the general population. And the reaction to that fear is more police presence, more intrusion into the daily routine of life.

Al-Qaida, the preeminent terrorist organization of our time, has forced us to spend billions of dollars on transportation security, establish a multi-billion dollar Cabinet department, and has eroded our freedoms due to government surveillance and intrusion. Al-Qaida has succeeded in instilling fear and achieving their political goals.

While the NRA’s political goals are to elect right-wing anti-gun-safety politicians, they also have a political agenda. More significantly, their stated goal, to establish a TSA-like atmosphere in schools plays off their agenda of unrestricted access to guns and other lethal weapons. And schools are just a start. If we place armed guards in schools, what about malls, churches, parks, and other places where children and adults congregate?  In the end, if the nation adopts the NRA agenda, the result is no different than that which Al-Qaida has already accomplished, only on a much larger scale.

So by strict definition, the NRA is not a terrorist organization and Al-Qaida is. The difference is that the policies of the NRA have resulted in more dead Americans than Al-Qaida could achieve in its wildest dreams. 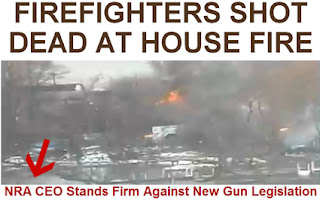 Posted by Deciminyan at 1:43 PM