In the contentious world of politics, many are calling for bipartisan cooperation. A legislator’s job is certainly easier and less stressful if he or she can work cooperatively with the other party. But bipartisanship run amok can result in capitulation - capitulation of ideals and failure to serve those who matter most, the electorate.

Such is the case in New Jersey, where the Democratic legislative majority has allowed Republican Governor Chris Christie to run roughshod over state employees, labor unions, and public school students.

Now, Democrats and Republicans in New Jersey have joined forces to try once again to revitalize Atlantic City tourism. On the surface, this is a wonderful and much-needed initiative. Once the crown jewel of shore attractions, the “Las Vegas of the East” has succumbed to the proliferation of gambling establishments throughout the northeast, and has been consistently losing market share and revenue.

This week, Governor Christie, with top Democrat Stephen Sweeney at his side, announced the granting of a quarter-billion dollars of funds from the cash-strapped state treasury to rescue the partially-built Revel Casino and to establish state control over a large part of the city. This stimulus package will create hundreds of much-needed construction jobs, moving people from the unemployment line to the taxpayer rolls.

Christie and Sweeney touted this bipartisan agreement at a photo-op in the unfinished Revel lobby. Sweeney praised the governor for taking action to resuscitate Atlantic City, giving Christie credit for attacking a problem that has been ignored by both political parties for too long.

Their proposal creates a Casino Reinvestment Development Authority which will impose state control on an Atlantic City Tourism District which includes the Boardwalk and Marina casinos and the airport. State police will be responsible for patrolling those areas while the rest of the city will be the responsibility of the local force, which, like other New Jersey urban areas, has had to lay off dozens of officers. 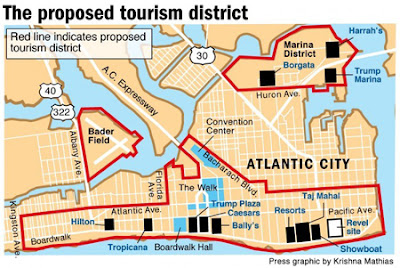 Keeping with Christie’s disdain for government services that protect taxpayers, the requirement to have state inspectors on gaming floors will be eliminated. Given the amount of cash flowing around and the history of corruption in the state, is this really a good idea?

Atlantic City mayor Lorenzo Langford is not happy with this new arrangement. But it’s not just because some of his power and influence in his city is being usurped. The mayor points out that the state police patrols will cover the tourism and predominantly white residential areas, while the African-American communities will not reap the benefit of the state’s largess. Christie’s retort was not surprisingly arrogant and borderline racist when he accused Langford of “playing to the lowest common denominator.” Whether Langford is right or wrong, Christie is operating from a position of power and money, and instead of maligning Langford, he should be the one to extend the olive branch to ensure that all the people of Atlantic City benefit from this initiative, not just the private investors and Christie’s Cronies.

No one disagrees that the state should be more aggressive in promoting Atlantic City. The budget to promote tourism has been increased, and if executed properly, that will pay for itself in more tax revenue and jobs. But perpetuating a Baghdad-like “green zone” of safety around an otherwise decaying urban area will not solve the problems inherent in Atlantic City. We should have learned that lesson in the state takeover of Camden.

Before we invest a quarter-billion dollars in a private enterprise, we should examine our priorities. Schools are suffering, cops and firemen are being laid off, infrastructure is decaying. Yet, both parties are eager to promote an industry based on greed and wishful thinking. Helping the Revel will not be a panacea - in fact with the increased competition for tourism dollars, the state may be stuck with a two billion dollar “white elephant” down the road. Both parties would better serve the public by working in a bipartisan manner to simultaneously solve our tourism and urban problems without having the taxpayer bear the burden of undue risk. I wouldn’t expect the GOP to be concerned about spending money to improve our urban areas. But Senate President Sweeney and his fellow Democrats should make these improvements part of the Atlantic City package.

Posted by Deciminyan at 3:59 PM