It took five years to build the World Trade Center Twin Towers. It took less than two hours from the first of the September 11 attacks for both buildings to collapse. It took ten years from that terrible day to reach an agreement on a plan to rebuild, and the reconstruction of that site is still a work in progress.

The obvious lesson from that horrific time in American history is that destruction happens quickly but building and rebuilding take time.

It took George W Bush eight years to nearly destroy the American economy. In the past two years, Barack Obama has started to rebuild it despite the Republicans’ digging in their heels and obstructing every one of the president’s initiatives, not because they had a better plan, but because their avowed goal was to bring down the President in 2012.

I’m not comparing the Republicans’ motives to those of Al Qaeda. The point here is that building things up is orders of magnitude more difficult than tearing them down. This applies to economies as well as skyscrapers.

One of today’s greatest challenges is to rebuild the American economy. But how we rebuild it is more important than how fast we rebuild it. The path that the Republicans are promoting, and many Democrats are adopting, is to try to repair the Bush damage as quickly as possible, and place the bulk of the burden on the poor and middle class. While the wealthy and the corporations continue to receive tax breaks and exploit tax loopholes, the majority of Americans are being asked to sacrifice by accepting lower wages, more expensive medical care, and fewer essential government services.

No doubt, repairing the damage done by the Bush administration will be difficult. The wars of choice are draining our treasury and will continue to do so for another generation as we care for those brave men and women who were injured and traumatized in the Middle East. The obscene government-backed bonuses that are granted to the financial manipulators just increase the wealth gap between the rich and the poor.

The American success story is not dead - it’s just been derailed. As a society, we need to return to our roots. We need to reward those who add value to the economy by providing products and services rather than those who manipulate the financial system for their own gain. We need to increase government investment (as distinguished from spending) in infrastructure and research - initiatives that will pay off tenfold down the road.

And yes, we need to increase taxes. But we need to do this in an intelligent and progressive manner. Marginal tax rates are lower than they’ve been since the 1940s, and those who benefit the most from America should be called upon to return the favor. By freezing spending, as many have proposed, we will destroy jobs and make life worse for those on the lowest rungs of the economic ladder. Those who benefited the most from the past generation’s investments in education and infrastructure should be the ones who help ensure that the next generation has the same opportunities.

This will be difficult, given that politicians of both parties are beholden to their corporate benefactors and that getting a progressive message heard is difficult in this day of corporate-controlled media. But just as a journey of a thousand miles starts with a single step, all citizens must lobby their elected officials, one letter or phone call at a time, to help save America. 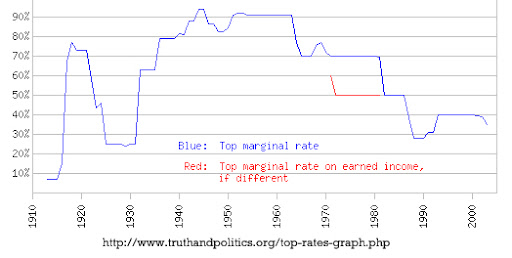 Posted by Deciminyan at 2:38 PM