What is the best place in America to connect with the Fourth Estate? It's down Pennsylvania Avenue from the US Capitol – The Newseum.
Today, my wife and I visited the two-year-old building, designed by James Polshek – the same architect whose National Museum of American Jewish History will open in Philadelphia this November.
The Newseum highlights the work that print, radio, television, internet, photo journalists, and even bloggers have done and continue to do around the world – some giving their lives in the process.
It's an impressive collection of journalistic history, especially the nostalgia for print newspapers as they disappear and morph into sound-byte versions of their former selves. 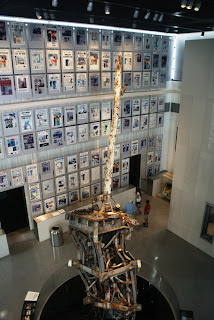 I took away two strong impressions from this visit. First was the 9/11 gallery which used front pages from around the world to embrace the shattered remains of the television transmitter tower that was atop the World Trade Center. The unanimity of shock, outrage, and fear permeated that day.
Second was the dismay I felt when looking at an exhibit on Edward R. Murrow. Arguably the greatest journalist in the history of America, Mr. Murrow took on the internal forces of hate and demagoguery until his message was not longer tolerable by the corporations that sponsored his show. We need probing journalists like Mr. Murrow today to sort out the spin from the truth. Where are they?
The Newseum is a “must see” for visitors to our nation's capital.
Posted by Deciminyan at 5:23 PM