Chris Christie is at a crossroad in his career.

The candidate that he so vociferously supported for President was overwhelmingly defeated. Christie, who has angered the Democrats and a few moderate Republicans with his words and deeds, has been the target of similar vitriol from the mainstream GOP for embracing President Obama and big government in the hurricane relief effort.

His brusque style, while endearing to some, diverts attention from his agenda.

He embraces right-wing extremism by drinking from the teat of the Koch Brothers and supporting wacko candidates like Steve King in Iowa. Yet he pisses off those same extremists by appointing a Muslim judge, walking hand-in-hand with a black president, and extoling the big-government virtues of FEMA. He preaches bipartisanship while holding a lock on most of his GOP legislators.

Unlike those who only espouse family values, he actually practices them. I don’t think you’ll see Chris Christie join the litany of many GOP powerful politicians who hold back false tears while confessing to an extra-marital affair. Yet his ethical behavior leaves many questions unanswered, such as his friend’s dealing with the lucrative halfway house privatization business or his questionable “charity” to help hurricane victims.

He claims he’s a friend of the environment while simultaneously and unilaterally waiving environmental regulations. He vows to rebuild the Jersey Shore while ignoring the root cause of the magnitude of the destruction – man-made global climate change.

Unlike Mitt Romney, who had multiple and changing positions on just about everything, Christie invariably stands firm on the issues. Once he makes up his mind, he rarely changes it. And that, in a nutshell, is Christie’s problem.

There’s a difference between flip-flopping and evolving on one’s position. President Obama and New Jersey  Senate President Stephen Sweeney evolved on their position on gay rights and marriage equality. They weren’t for it one day and against it the next. They moved slowly along the continuum toward the side of tolerance and then equality.

Chris Christie can leverage his popularity to fill the post-election void in Republican party leadership. If he does, how will he use that power? Will he continue to allow the party to slide down the abyss created by the extreme right wing? Or will he lead the charge to form a neo-moderate power base within the party? Will he embrace the thoughts of Michelle Bachman and Steve King, or will he move the party toward the more moderate positions of former Governor Christine Todd Whitman and State Senator Diane Allen? 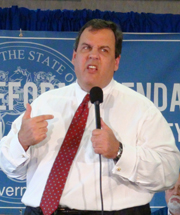 His actions over the next few weeks and months should provide us with a hint. Now that Obamacare has been affirmed by the Supreme Court and the popular electorate, will Christie finally sign the health exchange bill? Now that the influence peddling of the Koch Brothers has been neutered, will Christie evolve into a friend of the environment? Now that both polls and referenda have shown that marriage equality has the overwhelming support of the population, will Christie release the lock he has on GOP legislators and allow them to vote their conscience? All of this will play out over the next twelve months as New Jersey elects its Governor and legislature in what we hope is the post-Tea Party era.

Make no mistake about it – Christie is governed not by ideology, but by his supersized ego. He craves power and attention. The question is, will he achieve his goal by creating a winnable scenario as a neo-moderate, or will he continue down the destructive path of allying himself with Tea Party and corporate extremism?
Posted by Deciminyan at 9:23 AM