A daily diary from the annual Netroots Nation conference

The day at Netroots started and ended with comedy, with a whole lot of advocacy in between. There was a lot happening - here's a summary of my day.

As is the custom, the day started with a morning roundup of the news - a toungue-in-cheek review by several pundits, hosted by Daily Show writer Lizz Winstead. One highlight was the revalation that in the wake of the Trayvon Martin murder, the NRA is now offering "stand your ground" insurance in states like Florida. So these "pro-lifers" will insure a small number of  people who shoot first and ask questions later, but are against health insurance for the vast majority of Americans. On the Senate's recent rejection of equal pay for women, Alaskan pundit Shannyn Moore listed  the professions where women are paid, on the average, more than men - baker, pre-school teacher, dietician, clerk, manicurists, bussers, and teaching assistant. So there!

I attended a breakout on legal issues facing advocacy groups (lots of leagaleze and taxation issues regarding the differences between 501c(3)s, 501c(4)s, 527s, PACs, SuperPACs, etc. If there's a bright side to the Citizens United deal, it keeps tax lawyers employed. The Alliance for Justice (afj.org) has a on-line digital advocacy guides in this area. That's a good thing, because the two lawyers on the panel answered most of the audience's questions with "it depends."

The right wingers have always seemed to have the upper hand when controlling the language of the debate, so a session "How Progressives Get Narrative Wrong and How to Get it Right" sounded intriguing. It was not quite what I expected - more high level and generic, and more focused on the advertising side of messaging than the message itself. The comparison of Obama's messaging technique to that of a superhero was worth the price of admission. Another was the discussion of how a television program like All in the Family helped reshape Americans' attitude toward tolerance. The new buzzword i learned was "transmedia." Look it up.

After that, I listened to a discussion about the movie Bully. In addition to the movie's producers, some of the kids who appear in the movie were on the panel.

The next session, "The Battle for Congress", was strictly a Q&A session with a group of political experts. And experts they were. The audience threw out questions about specific congressional races, and the panel discussed them in detail.  It seems like they were up to speed on all 435 House races and the 34 Senate races this fall.  I asked about the Adler/Runyan contest in NJ-3, and they discussed the dichotomy between Burlington and Ocean Counties, and felt the race was winnable for Shelley Adler, but it would be very close.

A marriage equality panel focused on some of the upcomng electoral contests and stragegy, especially in Minnesota and Washington State. The panelists emphasized how they are building alliances with people of color, the faith community, and even soccer moms. All agreed that President Obama's recent statements supporting marriage equality had a significant positive impact.

The evening keynote session was a parade of progressive activists, leading up to the keynote address. Providence Mayor Angel Tavares discussed why cities matter. In one of the more poignant moments of the program, Netroots Nation Executive Director Raven Brooks accepted a placque from a group of local hotel workers expressing appreciation for support during a recent labor dispute. Cecile Richards, president of Planned Parenthood, delivered a passionate talk about how social media helped reverse the position of the Komen Foundation. Environmentalist Bill McKibben discussed climate change and his best line was how the first Minutemen and Tea Party activists were more inclined to shoot at the wealthy and powerful than they were to suck up to them. The folks in the audience, he pointed out, are not "radicals." Rather, the radicals are the oil companies - the ones who are willing to change the chemical composition of the earth's atmosphere.

Lily Eskelsen, vice president of the NEA, talked about teaching and the impact of extremists like Grover Norquist.

Congresswoman Tammy Baldwin, who is running for US Senate from Wisconsin, was well-received. She was one of a handful of legislators who voted against the foolish repeal of Glass-Steigel, and if elected will be the first openly gay US Senator.

Senator Sheldon Whitehouse talked about Social Security, Medicare, and Pell Grants as the pillars of America and urged progressives to be unshakable on these issues. He talked about the evil Citizens United decision.

The keynote speaker, New York Attorney General Eric Schneiderman, was a bit wonky in his briefing on movement politics. He was greeted by a small demonstration of folks carrying banners "Jail the Bankers." Schneiderman pointed out that the legacy of the New Deal was not a bunch of alphabet soup agencies, but was a transformation of ideas where Americans looked out for each other. He urged the audience to work toward a second New Deal to resurrect these ideals.

The day ended with a Laughing Liberally comedy show, including New Jersey's own Joey Novick.

Attending this series of events and gathering tons of good information was like drinking from a firehose. And there's two more days of this. I love it! 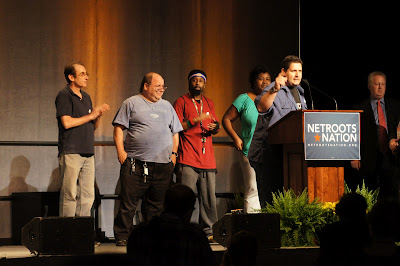 Posted by Deciminyan at 2:14 AM