After a 34-year hiatus, the Nuclear Regulatory Commission approved a license for the construction of the first new nuclear reactor in the United States since before the Three Mile Island catastrophe. Two reactors will be constructed at a stated cost to ratepayers of $14 billion near Augusta, Georgia, the second largest metropolitan area in the state with a population of over a half million, plus another 30,000 troops stationed in nearby Fort Gordon. In addition to the cost to the Southern Company’s ratepayers, the construction is backed by an $8.3 billion federal loan guarantee paid for by you and me.

Proponents of nuclear power contend that it is safer than it has ever been. They say that a Fukushima-type disaster cannot happen here because we don’t have simultaneous typhoons and earthquakes. But the bottom line is that no man-made system is foolproof. Consider, for example, an area where safety is paramount and large sums of money are spent on continuous improvement: commercial aviation. Air travel is safer than ever, but tell that to the 50 people who perished in Colgan Air Flight 3407 three years ago. Tragic for sure, but other than to the families of those who perished, there has been no lasting effect.

The impact of nuclear accidents, however, lingers for generations.  The area around the Chernobyl plant is uninhabitable 26 years after that accident and will be so for the foreseeable future. No doubt, the same will be true for the environs of the Japan disaster. But that’s not the only legacy of nuclear power.

Today, the United States has no comprehensive plan for the disposal of waste products from commercial power reactors. Tons of highly radioactive detritus are generated each year, most of which is stored on-site – a tempting target for terrorists. This is just another problem that we are handing down to future generations.

A more sane and rational approach would be to divert those billions of dollars to clean, renewable energy. Solar power is cost-competitive with nuclear, and with some investment wind power is not far behind. Any accident at a renewable-energy facility will not linger for generations as it would for nuclear.

So if you’re planning on relocating to eastern Georgia, here’s a map with a 50-mile radius circle around the new plant. That’s the distance that the US Government recommended for evacuation after the Fukushima disaster. Maybe such an accident will never happen here. But if it does, the costs in lives, health, relocation, and economic losses will be overwhelming. 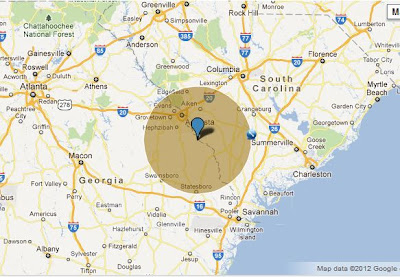 Posted by Deciminyan at 1:32 PM