Where is the Outrage?

Every loss of human life is a tragedy, and the three thousand lost on that day are a terrible catastrophe. But, unfortunately, that’s just the tip of the iceberg.

Consider, for example, the fact that since 9/11, 150,000 Americans have been murdered. And what are the root causes of murder? Poverty and easy access to guns. Yet, where is the outrage at the fact that the greatest country in the world has so many people who live in squalor, are being malnourished or starved, and have no way out? Where is the outrage that just about anyone can obtain a gun without any meaningful background check or safety training?

Consider also that 45,000 Americans die each year due to lack of affordable health care. Instead of outrage, the Republicans are trying to reverse the baby steps we have taken to mitigate the death spiral that these Americans are caught in. Where is the outrage?

Consider that more Americans have died in the unjustified wars started by Bush and perpetuated by Obama than died on that horrible Tuesday a decade ago. And add hundreds of thousand Iraqi and Afghani lives to that terrible roster.  Certainly their lives are equally as precious. Where is the outrage?

Consider the death penalty. America joins North Korea, Syria, and Iran as a country that kills its own citizens in the name of justice – including many who are innocent. Where is the outrage from the so-called pro-life community?

No amount of jingoism and flag-waving will mitigate our sorrow or fix these problems. Instead, we need politicians and leaders who pursue help for the downtrodden and real opportunity for all Americans, not just the elite few.

So when you think about what Osama Bin Laden did to us a decade ago, remember those who perished in the towers, the Pentagon, and on the airplanes. But keep in mind that their lives are no less precious than those of the tens of thousands who die each year because of the disregard that our politicians – especially but not exclusively Republicans – have for America’s citizens. 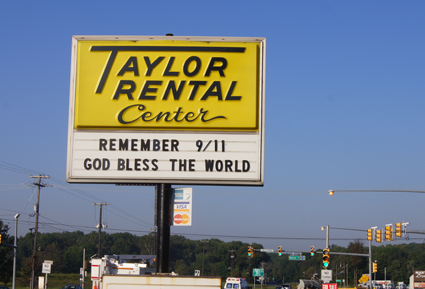 Taylor Rental gets 9/11 right
Posted by Deciminyan at 8:56 AM