Going into the Thursday afternoon and evening sessions, I thought the highlight would be hearing Russ Feingold's keynote address – and I was not disappointed. But the personal highlight was a fairly lengthy one-on-one discussion of the New Jersey political scene with Markos Moulitsas. Never would I have imagined that an amateur blogger like me could have an engaging give and take with the legendary founder of Daily Kos. 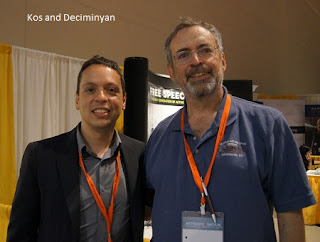 The afternoon session I attended started with Moulitsas joining Lily Eskelsen of the NEA on “The Future of the American Dream.” They discussed the DREAM Act – why it is a “no brainer” - and what roadblocks the Republicans are building to destroy families. Moulitsas pondered why so-called religious people support the DREAM Act as being pro-family but are still anti-family when it comes to marriage equality.
The second afternoon session was a panel discussion “What to Do When the President is Just Not that Into You.” Elise Foley of the Huffington Post wrote up an excellent summary (and it's getting late), so I'll refer you to her write up on the session. Getting to meet Dan Choi was an added bonus for me. 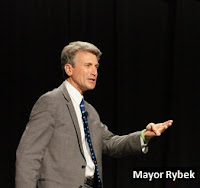 The evening session was a who's who of liberal glitterati – starting off with Minneapolis' progressive mayor R.T. Rybek (“we're not Mary Tyler Moore-ville any more”), a video greeting by liberal hero Keith Olbermann (who will be the keynote at Netroots Nation 2012), Raven Brooks (executive director of Netroots Nation), bloggers from Zimbabwe and Pakistan, and Adam Bonin (chairman of the NN board) who pointed out that the right-wing counterpart to Netroots Nation, Right On Line, is meeting here in Minneapolis starting tomorrow. He was followed by Randi Weingarten of the American Federation of Teachers, Governor Howard Dean, and the session culminated with Russ Feingold's keynote on the disaster that is known as Citizens United. Howard Dean got the adrenaline flowing and was a tough act for Feingold to follow, but the work that Feingold is doing to overturn Citizens United may be the last best hope for the preservation of the American Dream. 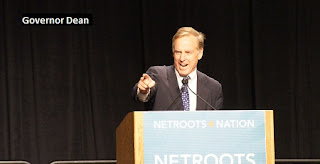 My tweets from the session are on twtter.com/deciminyan. So now, I have the difficult task of choosing which of the several breakout sessions I'll attend tomorrow – and I'll be live tweeting those, too. For now, good night, all.
Posted by Deciminyan at 11:56 PM