When All You Have is a Hammer, Everything Looks Like a Nail

A conservative friend of mine (not an oxymoron) sent me this photo with the caption: “More proof there is no problem that cannot be solved with power tools.” 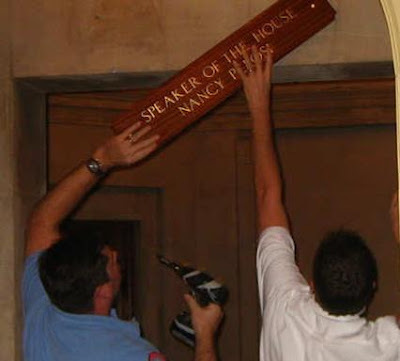 Certainly, that’s a typical right wing oversimplification. George Bush tried to use power tools instead of diplomacy and got us stuck in a seemingly endless quagmire in the Middle East.

One person who has been extremely effective over the last four years without resorting to blunt instruments is the former Speaker of the House, Nancy Pelosi. Despite the Republicans’ lack of concern for the American people and the often conflicting opinions within her own party, Pelosi will be remembered as one of the most effective Speakers in recent history.

While I didn’t agree with her on everything (her refusal to investigate the actions of the Bush/Cheney Crime Family and her killing of Single Payer health care without debate come to mind), her list of accomplishments leaves a legacy that the American people can be proud of. She gets a lot of credit for herding the House through one of the most important lame duck sessions, but that’s just the culmination of a spectacular display of leadership. Her skill in navigating the minefield of health care reform - successfully maneuvering around the anti-choice zealots, moneyed special interests, and the intransigence of the Party of No -  got us the first meaningful reform of health care since Medicare was born a half century ago. Add Wall Street reform and equal pay for women - all in the shadow of virulent and mean-spirited criticism - to her list of accomplishments.

Now that we have a loyal opposition party in the House, I look forward to her working to put the brakes on the list of budget-busting gifts to the wealthy and the draconian initiatives that the Republican Tea Party is pushing.

Let’s hope that the photo is repeated in January, 2013, when the same workers are putting up that sign over the doorway.
Posted by Deciminyan at 11:51 AM