Ballistic missile submarines are the most potent component of America’s nuclear arsenal.  Running silently in the depths of the ocean for up to 90 days at a time, one boat can deliver more lethal firepower than was expended in World War II.  At the same time, these vessels are also one of the most effective deterrents.  Their silence and stamina provide them with virtual invulnerability and they would be capable of retaliation to any attack on the US homeland.  It can be argued that the existence of this fleet of high-tech stealthy systems enabled us to end the Cold War without resorting to another Hiroshima.
Yet the privilege of serving the country on one of these platforms has been exclusively limited to male officers and seamen.  While women have been serving on surface ships since 1994, their assignment to submarines will be phased in starting in 2012 – first with officers and perhaps eventually with enlisted personnel.
Submarine duty brings its own challenges.  I’ve had the privilege of riding on a nuclear attack sub during a training mission, and I can attest to the fact that the term “close quarters” is an understatement.  The engineers who design these vessels utilize and re-utilize every cubic inch within the metal tube in such a manner that would make an origami grand master proud.
Unsurprisingly, there are those both within the Navy and in the general populace who are in a tizzy about allowing women to serve their country in the Silent Service.  Their argument is that having the “opposite sex” on board in such close quarters would be inappropriate and stressful.  Yet, when you peel back these arguments, you find them unsubstantiated and specious.  Surveys show that wives of submariners are more concerned about women taking their husbands’ jobs than any potential hanky-panky.
Thanks in part to the late legendary Admiral Hyman Rickover, submariners are a special breed.   Selection to serve in the nuclear navy is not only based on their broad and in-depth technical skills ranging from oceanography to nuclear reactor design, but also in their psychological profiles and their ability to serve in the very demanding environment to which they will be assigned.  I have had the privilege of meeting many submariners and NASA astronauts in my career, and I would place people in both categories as examples of the epitome of professionalism and service to America.
One would have to be naïve to think that there are not any gay submariners serving today.   Any discomfort or issues will be handled appropriately by the submarine’s XO or Commander.  The same will apply to interpersonal issues with women in the crew.  These people are professionals who have been given the responsibility to handle billion-dollar lethal weapons systems in the name of national security.  Certainly they can be equally effective at handling occasional interpersonal issues.
In an ideal world, we would not need such potent and expensive weapons systems.  Nuclear disarmament is the ultimate goal, but it will take a lot of hard work and several generations to put that genie back in the bottle.  Until then, the nation is best served by insisting that the best of the best be the only qualification to serve on these frightening and necessary war platforms.
Related post: Toward a More Perfect Union 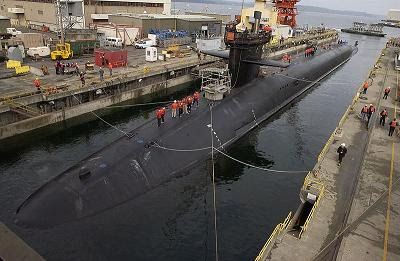 Posted by Deciminyan at 8:46 AM