I was deeply disappointed when Chris Christie was elected governor. But that was inevitable. Jon Corzine’s administration was caught up in the whirlwind of the Bush Recession, and no incumbent could weather that storm in 2009.

Yet, I was willing to give the vaunted prosecutor the benefit of the doubt. Clearly, he would have to make painful cuts in state services, but I was hoping he would do it with fairness and compassion, without trickery or a political agenda. Boy, was I wrong.

It is unconscionable that Christie is balancing the budget on the backs of the poor and middle class while leaving the rich unscathed. His approach plays directly into the political agenda of the right, and the term “Compassionate Conservative” is as dead as John Adler’s re-election campaign. Maintaining state aid for charter schools while slashing aid to public schools only hastens the demise of free and high quality public education, a hallmark of America’s values. If the governor is mad at the teachers union, don’t take it out on the kids. His backtracking on his campaign promise not to raise taxes is the right thing to do, but the wealthy are apparently exempt from this “shared sacrifice”.

In this crazy world, where a failed beauty queen half-term governor can run for Vice President, where a state’s schoolbooks can purge Thomas Jefferson, and where the ranting of the daughter of a former Vice President accuses lawyers of treason in performing their constitutional duty, anything is possible. If Christie manages to cook the books and balance the budget on the backs of New Jersey’s workers, the Republic party would take a serious look at him as a challenger to President Obama in 2012. John Adams, our second president was a bit overweight, and his nickname was “His Rotundity”. Are we about to see our corpulent and grandiloquent governor receive the moniker of “His Rotundity II”?

To paraphrase the late Lloyd Bentsen, “Governor, I knew John Adams (or at least watched the HBO miniseries), and sir, you’re no John Adams”. 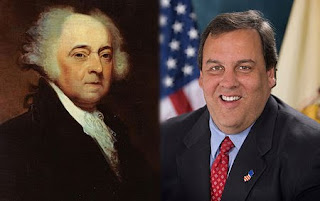 Posted by Deciminyan at 7:25 PM