It's Time for Another Giant Leap for Mankind

I’m a space junkie.  I grew up watching the Space Race between the US and USSR.   I remember the first US manned space flight – Alan Shepard’s 15 minute sub-orbital jaunt off the coast of Florida.   I bought a vinyl recording of the air-to-ground communications and listened to it enough times to be able to recite the capsule- to-Canaveral communications from memory.  The deaths of my heroes on Apollo I, Challenger, and Columbia (as well as of several Soviet cosmonauts) were like a death in the family.  I thrived on the successes of Mercury, Gemini, Skylab, Apollo, Mir, the International Space Station, and the Shuttle.  When I started my career in the summer of 1969, one of my first purchases was a television set so I could watch the miracle of Neil Armstrong’s footsteps on the moon.  While I didn’t work directly on any of the space programs, during my career I was fortunate to work to support the Atlas, Titan, Landsat, Shuttle, ISS, and several classified space programs.  I’ve had “behind the scenes” tours of the Johnson Space Center (that’s me on the left in the photo with Dr. Segun Thomas at JSC in front of a huge environmental test chamber) and the Kennedy Space Center, highlighted by the thrill of piloting the Space Shuttle simulator to a not-so-perfect landing on the KSC runway.  I’ve been fortunate to work with several former astronauts – all as fiercely intelligent as they are brave. 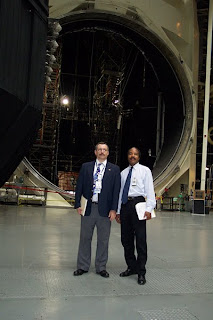 After the splashdown of Apollo 17 in 1972, the buzz of the manned space program was somewhat abated.   We were at a crossroads.  We met President Kennedy’s goal of going to the moon and returning safely by the end of the decade, and repeated it five more times. (And by the way, all of this was done using computer technology that was much less powerful than the iPhone I carry in my pocket).  We bit our nails until the ill-fated Apollo 13 came home.   The “reusable” Space Shuttle program was started – albeit without a clear mission.  We had some subsequent wonderful and priceless scientific successes in unmanned space exploration through the Hubble Space Telescope (which couldn’t have been successful without the several manned repair and upgrade missions), the never-say-die Spirit and Opportunity exploration of Mars, and numerous deep space probes that have travelled into the deep reaches of the Solar System.
Now, we are at another crossroads.  The Shuttle program is winding down, with five more flights to go.  Nothing generates as much excitement as manned space flight.   Is it expensive?  Sure.  Is it worth it in terms of risk and dollars?  Certainly.  Those who argue that we can learn as much about the planets by sending unmanned probes are right, but manned space flight provides much more than excitement and national pride.   Advances in medicine, materials, energy, and other fields are direct results of the manned space program.
So where do we go from here?   President Obama cancelled the Constellation program which would have built the boosters and capsules to return us to the moon.   (Full disclosure: I am retired from Lockheed Martin which had a big chunk of the Constellation program).  Instead, NASA will spend $6 billion to jump start private companies to develop and operate vehicles that will ferry civilian astronauts to the International Space Station.
While the cancellation of the Constellation program was the right thing to do, our experience with the privatization of government services is unblemished by success.   Competition is a good thing, but operating the space program as a “for profit” enterprise will result in duplication of effort, compromise safety, and reduce the ancillary benefits that we have enjoyed from NASA’s research and development.  We will lose the programs that NASA has run with schools and universities that encourage students to study math and science, and we will continue to abdicate our leadership in these areas to China and India.  Manned space flight is a risky business, and it is yet to be seen whether private companies will be willing to assume those risks.  Sure, there will be government subsidies, but as we have seen in the banking business, subsidies without control lead to a small number of very rich people with no upside for the taxpayer.
There is a better way – and we have irrefutable evidence that it works.
Let’s set a goal of a manned mission to Mars.   The Red Planet has been an object  of human wonderment since the first cave man marveled at this oddly colored moving star in the sky.  But let’s not do it alone.   Make it a goal of humankind to establish a presence on Mars by 2025 and continue the mission spearheaded by our astronauts, cosmonauts, and taikonauts.   We need to partner with Russia, China, Japan, India, the European Space Agency, and the rest of the world to make a Mars mission a global goal.  We have shown that we can partner with our fellow humans on the International Space Station – let’s take it to the next step and expand those partnership goals to work together to go to Mars.   Not only will this allow us to share the expense and rewards, but it also will be a giant leap to bring mankind together for a common and difficult goal.
Posted by Deciminyan at 5:25 PM